THIS is the real Santa Claus, aka Sinterklaas: Although I had to let go of the brilliant idea that Coca Cola invented Santa Claus, even Wikipedia agrees that we, in the Low Countries, have the true and original saint. Ha! Moreover, we’ve managed to get the Americans to adopt him for Christmas, only to have them export him back to Europe. It is ironic, in a way, but since it means I got presents TWICE in december as a kid, you don’t hear me complaining ;).

See, for us, Belgian kids, the highlight of the year is December 6 – sure, you get presents from your parents and family with Christmas, but the true event to look forward to is when Sinterklaas arrives in the country. Days, even weeks before the big day, we would put out our shoe near the window, hoping Zwarte Piet (Black Pete, Sinterklaas’ servant) would know we didn’t have a chimney and he’d have to get in through the window. We’d leave our letter to Sinterklaas, with a long list of the presents we would like to receive, a carrot or a sugar lump for his big, white horse Slechtweervandaag (Badweathertoday), and occasionally a beer for Zwarte Piet (not always – we didn’t want to get him drunk). The next morning, the letter was gone, the carrot was left half-eaten and the beer bottle was empty, but some candy had been left instead. The proof was overwhelming: Sinterklaas had come! And he had taken our letter!

My mum was sure sometimes she heard the horse on the roof, but I never did… but then again I wasn’t such a good listener. Sometimes though, Zwarte Piet would slam open the door and throw cookies and candy around – you never knew when he would come, or from which door (although attentive children might have noted it was the door through which their father disappeared 5 minutes before) and you had to be REALLY quick to see him. But when the doorbell rang on the night of December 5th, and Sinterklaas and 3 or 4 of his Zwarte Piet’s entered the room, everybody froze. Excitement, because the big bag Zware Piet was carrying promised presents, but also fear: Sinterklaas had a big book in which all your mischief was listed, and you could only hope the list wasn’t so long that Zwarte Piet would be tempted to put you in the bag and take you back to Spain with them… . The way they were standing behind their boss, looking very big and black (it’s not racism. it’s from going up and down the chimney.) and serious, was pretty daunting, so I generally tried to please them by singing or playing a song on my flute – and it worked every time ;). Of course, the Sint couldn’t make it to our house every year – there were just too many kids to be visited, but even when he was busy he’d make a quick stop during the night and left our well-deserved gifts in our shoes.

This year though, I have bought the Sint a gift. A GPS. Because my grandma has moved 3 times since I was small, but he still brings MY chocolate to HER place. And you know what I found in my shoe this year?

If you want to know the whole story of Sinterklaas/Santa Claus, I refer to Wikipedia, here is the story of how I, as a Belgian child in the 80’s, experienced the whole thing – traditions evolve and differ slightly in the Netherlands, Germany, … so you might find other versions elsewhere.

Sunday I’ll be going to Copenhagen with some friends to visit a certain museum (the fact that I don’t even remember which one only shows how eager I am to visit museums) (It’s not like I don’t wanna go. I do. I feel I have to work on my general culture/knowledge. But that’s really the only reason I’m going. That and my friends :).) and as we were making arrangements, one of them suggested we’d go a bit early so we could taste a bit of the “Christmas atmosphere”.

Is it Christmas already?

The thing is: she’s right. It is perfectly possible to go to a Christmas market mid-november. I was in Copenhagen last weekend. I was in Göteborg the day before when there was the grand inauguration of the first part of the walk of light (3,4kms in length) and the christmas market at Liseberg. And you know what? It ruins Christmas.

I like Christmas, I really do. I like the tree and the presents and the lights and the candy and the christmas market and everything else surrounding it. I even like the family dinners, uncomfortable as they are. And the cities are simply beautiful in the evening, with christmas carols playing and lights everywhere.

But it’s too much too early – Sinterklaas hasn’t even come yet! (the fact that Sinterklaas (the ‘real’ Santa Claus) doesn’t come to Sweden or almost any other country is thereby completely irrelevant.) And really, I get cranky from all this Christmas stuff. Christmas means holidays, so I get all happy and holiday-ish – until reality strikes: I got to work another 5 weeks. It’s depressing. But at least they’ve gotten rid of the “X-mas” thing that seemed to dominate decorations the past few years … .
Christmas lasts one day, but it’s celebrated for almost 3 months: once Halloween has passed, the Christmas decorations quickly take their place (when I was shopping for my Pippi-costume on October 30th, the boxes with Christmas cards and stuff were already standing in the store, ready to be unpacked and placed in the racks) and they won’t disappear before end of January (or if they do, they are replaced with Valentine stuff. which is worse.). So basically, we celebrate Christmas 25% of the time.

I suggest we bring this percentage down. Drastically. And thus I present: my personal Christmas-celebration-manual. 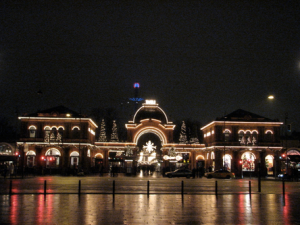 First of all, I like the lights in the city – it’s a bit depressing and all, this whole winter- and early dark-thing – so they can stay. But I don’t want to see any Christmas market, fake smiling Santa’s, toy commercials, decorated trees, Christmas cards, … before December 6th. December 15 (my mother’s birthday) you’re allowed to set up the tree: this gives you 10 days of counting down. 10 days is a nice number to be counting down from, and then you can actually look forward, because it’s REALLY coming closer. Next, there is a week of holidays between Christmas and New Year – yey! The tree and everything else can then stay another week or so, but by January 6 (Epiphany) all decorations should go back in the box, until next Christmas.

It will be a great month.

Rudolf, employee of (next) month