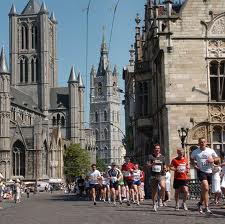 ING city run Ghent, where I hope to run next year

T. and I go running on a (more or less) regular basis. Hers is more regular than mine, I have to admit. But I try. And I’ll run three times a week in Sweden. Promise. (Ehm… .)

I never feel like going for a run, really, though generally I get into it after 4 or 5 minutes. It’s the whole changing clothes, changing shoes, thing that puts me off, I think, it’s such a hassle: you go running half an hour but what with all the prep and shower afterwards you loose an hour or more. But anyway, T. has more character than I have and it seriously helps to get my lazy ass up and running (although yesterday I was actually cleaning the fridge when I had to stop to go running, so not so lazy that time ha!) – so there we went. A 44 minute lesson (T. bought an mp3-player and is doing the 5-10km Start to Run thing), I was getting all mentally prepared – and physically, I might add, cause Evy (the “trainer” on the tape) demands we do a warming up: some jogging (running in preparation of … running… never quite got that) and waving your arms around, and skipping. I try to see it as a good deed: make people smile by making a fool of yourself, skipping ridiculously while waving your arms. I assure you they don’t see THAT very often in the city.

So, retorical question: what happens when I wanna start a nice jog 10 days before starting a new job abroad? Indeed, I sprain my ankle. Now, I have fairly long ligaments and flexible joints (you don’t wanna see how I can bend my knees), so I rarely have any serious injuries – I sprain my ankles on an almost weekly basis. But one day, several ice packs and soothing cream layers later, it STILL hurts. I can walk, yes, but that’s about all you can say. Just now it took me 10 minutes to go to the bathroom. Now let me tell you:

I DON’T HAVE TIME FOR THIS!

I need to transport some 30kg of personal belongings across half of Europe next week, I’ve already subscribed to dance classes in September, I NEED MY ANKLE!

I’m giving it one more day and night’s rest, but if it’s still painful tomorrow, I’ll go see a doctor.