I’ve talked about my absolute love of languages on this blog before, so I’m sure the regular readers don’t need to be reminded of that. But just in case: I love language(s).

I love how the same word can mean something different entirely to different people. I love how it allows you to be creative – to make stories, jokes, connections. I adore how connotations and denotations can completely mess up a conversation. I find it absolutely fascinating that what seems absolute jibber jabber to one makes absolute sense to another, and I love the thrill of that moment where you succeed in expressing yourself with words you didn’t even know existed before.

Still, there is a part of me that clashes with that love sometimes. A perfectionist part.

See, if there’s one thing I’ve learned about learning languages, it’s that you shouldn’t be afraid to speak. Yes, you’ll make mistakes, and yes, you’ll be misunderstood on occasion, but that’s part of the deal, and the satisfaction of hearing yourself make less and less mistakes as you speak more and more, is one of the best things about learning a language – or anything, for that matter. But while I advocate that philosophy with a passion, I find that not only do I not put it into practice myself (I flee into English faster than you can say ‘jibber jabber’ when I’m supposed to talk Swedish), I don’t exactly encourage it in others, either. Strangely enough, this happens most often for English.

Exhibit A: today, one of our master students came to me with a ‘question’.

Yes, so, do you know centrifuge, because, I have LBG, yes, that is, 5000 g, but, unfortunately, centrifuge is booked until three, but still, I cannot use it, so I don’t know.

For the confused reader, this meant: I need a centrifuge at 5000g to spin down my LBG. The one I normally use was booked until three, but despite the fact that it is way after three, it is still in use, so I can’t use it. Do you know where I can find another centrifuge?

Frankly -and with all due respect-, it is exhausting.

If this would have been in Dutch, I would have probably given him a big smile because Dutch is not an easy language, and at least he’s trying, right? Now that it is in English though, I can’t help but shout in my head – How long have you been studying English for? There’s something called grammar, use it! Make a sentence! How am I supposed to know what you mean with keywords only? And although I am well aware that a) not everyone is gifted for languages and b) English is so much easier for me simply because my mother tongue is in the same language group, I cringe and shiver and shudder whenever certain people talk to me because their definition of ‘a sentence’ seems miles away from mine.

It makes me feel like a bitch, because I know I have no right to judge them in the first place. So when I saw the following animation of (a part of) an article by Stephen Fry on language, I couldn’t help but smile (the text is quite long, but absolutely worth the read if you have the time!). Because maybe, just maybe, their “wrong” use of the English language is simple creativity, a re-invention of rules and words. And when I really, truly love language and everything you can do with it, I should be thrilled, not annoyed, when people explore other ways to convey their story, right?

I love languages. I always have and I always will – I love playing around with words, meanings, expressions, … and each language seems to have its own peculiarities, making it more suit for a certain situation. French has a high level of drama embedded in it, while Portuguese means love, and romance. English is more robust, solid, and to the point, and Dutch is very good at handling day-to-day business. Needless to say, I first fell in love while being on a French language course, I had a Portuguese boyfriend for 2 years, all work-related communications are in English and my mother tongue is Dutch. As a result, I often find myself blending words and expressions from each of these languages in whatever language I’m speaking at that particular moment, because, well, they simply fit better with what it is I’m trying to say. I give you: my favorite words and expressions.

“Le coup de foudre“. Literal translation: “struck by lightning”, in other words: love at first sight. But “love at first sight” just doesn’t reflect the BANG of the moment, the instant recognition, the “(s)he takes my breath away”-kind of feeling. I also like the presence of “fou” (crazy) in “foudre” and the (undoubtedly coincidental) likeness of the word to “se foutre de” (not giving a crap) (“foutre” then again seems to have its origin in the Latin “futuere”, “to have intercourse”, which is equally applicable). So when you experience le coup de foudre, you feel struck by lightning, and you don’t care about anything else, you’re crazy for that person, and … well … it’s clear what you’re aiming at.

You could roughly translate “saudades” with “homesickness”, but as with “le coup de foudre”, it just doesn’t fit. Homesickness is what you feel when you’re 7 years old and you go on a summer camp alone for the first time. Saudades… saudades is a sense of longing, intensely, with your whole mind and body for something/someone/someplace you cannot reach now (and possibly never). It is a feeling that encompasses much more than simply “missing”, and it has a strong component of melancholia and nostalgia attached to it. Fado is particularly apt at translating this feeling into music although, strangely, I don’t like the typical high-pitched fado-voices. Maybe I’ve had my share of saudades with the long-distance relationship I was in to last me the rest of my life :).

English
I have a strange love-hate relationship with English. I feel very comfortable in it (yes, “in”, not “with”), it has a strange familiarity and its vocabulary houses a number of truly great words.

It’s not so much the meaning of the word in itself, but rather how the word image matches so well with what it means. However (another favorite of mine), they should be written the British way. It should be “colour”. And “flavour”. “Flavor” just doesn’t do “flavour” justice – it’s so bland, it doesn’t really taste like anything. The pronunciation, on the other hand, should be South African. Or Irish. You gotta love the South African accent, ya! 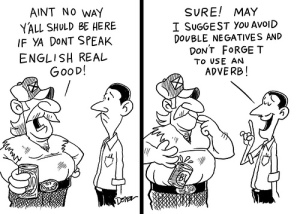 My main problem with English though is that I seem to be talking it all the time. Even when I talk French, or Dutch, English words and expressions wriggle (beautiful one, also!) their way into my sentences until I’m not sure which language I’m speaking. Whatever. There you go. You got me there! Please? No way. Oh my God. We have similar expression in Dutch, but they just don’t seem to do. And now that the vast majority of my communication is in English I have not only taken up the habit of literally translating English expressions into Dutch (“it doesn’t make sense” just doesn’t make sense in Dutch, trust me), but half of the nouns I use are either English or anglicisms of some sort. I have never understood how people could forget their mother tongue, but sometimes I feel I’m well on my way ;).

Dutch
Ah, marvelous, versatile Dutch … the number of dialects alone make it worthwhile studying. However, since my parents decided – in a fit of insanisty, I’m sure – to raise me in “General Dutch”, my dialect skills are below zero. I understand it to a certain degree, but it stops there. And thus I specialize more in the other end of the language spectrum: the academic, elite kind of speech. I’ve often heard I manage to make the simplest things sound complicated, as I use a vocabulary which seems to belong more in the 8 o’clock news than in a conversation between friends. I’m particularly fond of conjunctions, such as “daarentegen” and “desalniettemin”. Basically, a words need at least 4 syllables to be even considered being placed in my vocabulary ;).
However, one two-syllable word needs mentioning.

Like “saudades”, there is no simple translation for this one. Goesting is a desire for something, but it comes from deep within, you know? Like when you come back from a long walk, and you just feel goesting for a beer. It’s much stronger than just feeling like a beer, it’s something you need. Or when you have this special little feeling, after dinner, you’re really stuffed, and content, but you just would wanna have a cookie. That’s goesting. Of course, it applies also to other… non-food… things, so ladies – beware if you get near a guy with a pair of trousers full of goesting… . He might not have a strawberry ice cream with whipped cream in mind.