This is one of these moments I almost wish I had faith. You know, the afterlife and everything?

My grandfather died last night – it wasn’t as if we hadn’t seen it coming, but it was still… shocking. Quicker than I expected it to be (isn’t it always?). I wasn’t planning on taking my dad’s call at first, this morning, he should know by now that I am working at that time and it doesn’t exactly make a good impression when you’re Skype’ing at work. But I remembered my grandpa… and I figured that if my dad did call me during working hours maybe – just maybe – it was because it was important. And so it was.

I’ve already tried to honor his memory last week (you can read it here) so I will not repeat it here. In a way, it would be nice to think he is in a “better place” now. Seeing his parents and other loved ones again. On the other hand, I think he’d be bored pretty soon eating rice pudding with golden spoons every day for all of eternity. I know I would. And those 72 virgins can keep one busy only for so long. But I’m mixing up religions here, I believe (!).
I don’t know if opa was religious, if he was expecting to go to heaven. But if he still exists, in whatever way, I hope he is happy. I lost whatever religiousness/spirituality I had a long time ago, so that is the best I can do right now: I hope that if he *is*, wherever he is, he is safe, healthy, and happy. But I hope it from the bottom of my heart.

Opa was diagnosed with Parkinson’s disease almost 10 years ago, and while he kept in relatively good health for the first couple of years, since a year or 2 – and especially since he moved to the nursing home last year – he has hardly lived. I went to visit him with T last Sunday and it hurt to see him, capable only of drooling, sleeping, and hanging in his wheelchair – he now even lost the ability to sit. This was not the grandfather I had wanted to introduce to T. 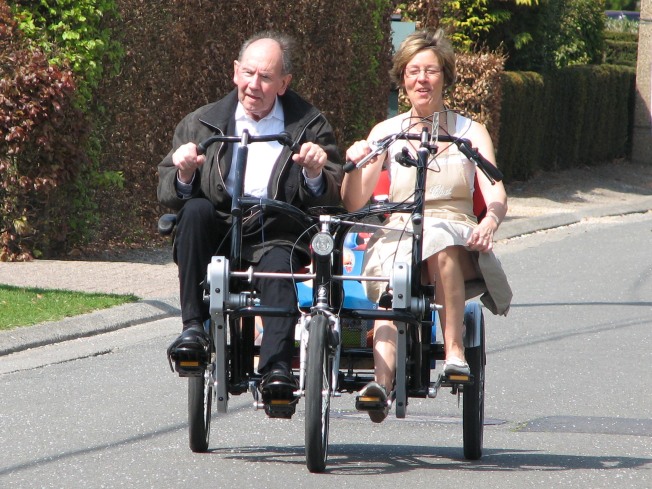 My grandpa cycling together with my mum only last summer.

He was the first person in our family to study. We’re not even talking university degrees here, but simply continued education beyond 14 years of age. He made a career in the bank and actually became a bank manager – years later, my uncle would follow in his footsteps. He was in nearly every board in our little village that had anything to say, and he was well-known and liked. He was also a musician: he sang in the church choir and he played the guitar – up until today I hear stories about how he would entertain everybody on holidays and parties, and one of my fondest memories is him singing old songs from his childhood to his grandchildren

(When I was just a little boy, about 6, my mother would often get angry at me. Whenever I’d sneaked a cookie out of the jar, she’d say: you naughty boy, in the corner you go!)

I never had a particularly strong bond with him, but he is my grandfather and I love him. And because I love him, it feels confusing to wish him dead. But it is also because I love him, that I wish he may go quickly and softly, because I am convinced with all my heart and mind that this is not the way he would like to live, he deserves to live.
I have been very lucky so far to have lost almost none of the people close to me. I am not counting my 3 great-grandmothers which I saw once or twice a year, and while I was very sad to lose my other grandfather, I mainly remember annoyance because his sudden death forced us to return from our family holiday (I was 10. And selfish.). Opa will be the first person I have really known who will leave. The most disturbing thing about that is not the loss itself – he has had a good life, the time for him to go is not unexpected nor untimely -, what lingers in my mind about this is that next up in line are my parents. And that, I fear, I will not be able to tackle so lightheartedly.

In honor of my opa, one of his favorite songs ” ‘t Is weer voorbij die mooie zomer” (“The beautiful summer is over once more”) by Gerard Cox, in more than one way appropriate.