At the last count, I am currently following 38 blogs, the vast majority of which are personal blogs maintained by women. I’ve often wondered about this, and at one point I actually started looking for interesting, personal ‘male’ blogs – but without much success, leading me to the conclusion that either men don’t have a personal life, or they are not able to write about it. That is, however, not what I want to talk about today. Because I follow all these people, from different nationalities, backgrounds, religions, ages, and even senses of humor, but when I look at what my Reader is presenting me with today, I am baffled.

An interview with Cinderella (which, by the way, was hilarious). Baby bumps. The start of lent tomorrow. One-uppers. Chickens.

I mean, I understand I’m 6-9 hours ahead of the rest of the world, but really? Not even a glimpse of a shimmer of a mention?

And I admit – what are we supposed to write about? What on earth have we, women in over-developed countries, to complain about? We have access to birth control, education (in Belgium, more women than men have higher degrees: 31,5% vs. 27,4%), we can vote, we can build a career if we want to, … sure, we kinda need to work on the equal-pay-for-equal-work-thing, and there’s this “glass ceiling” everyone refers to, but really, has anyone ever seen that?

That’s what I thought, yes.

But only last week, in the Belgian Chamber, an agreement was made that will force listed companies to have (at least) one third women on their Board – currently a mere 6% of board members are female. Yesterday, in Belgium, one woman’s contract was not prolonged at the shop she was working because she refused to take off her veil. Today, during coffee break, the gasps were audible through the uncomfortable silence when one colleague explained she doesn’t want children. Meanwhile, in large parts of the world, women are denied the right to work, to speak, to vote, to refuse men access to their body, to stand up, to organize themselves – even to think.

We are far from gender equality, or even from gender equivalence, if you prefer that term. And yes, that was, is, and will be a desirable, obtainable, and above all necessary goal. Because, as women, we are a group that is systematically denied rights and privileges based solely on the fact that we are women, something we may cherish, love or despise, but which we never chose, and which can therefore never be a ground for discrimination. I am not a feminist, I have much to learn about how the world goes round, and I’m pretty sure I don’t realize half how privileged I am. But it is therefore exactly that I need to commemorate today all those women who have stood up and fought for what should be their birth rights, that I need to raise awareness for the little, unconscious acts of discrimination we even barely recognize as such (how is a man who stays home with his kids not a real man?) and that I really, simple just want to celebrate today, which is my day as well. 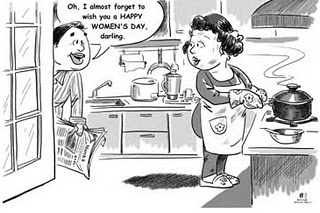